The Falling in Deep Collection continues into its second release with INK by Melanie Karsak.

Melanie is the amazing author of several steampunk, horror and fantasy novels.  She’s also one of the ones who put in the most work getting this collection together.

A mermaid princess destined to wed a handsome king…

It sounds like a fairy tale, but the reality is far murkier.

Ink, Princess of the Florida Atlantic mers, is slated to wed the ancient enemy of her tribe, the King of the Gulfs. After years of war that led to countless mer deaths, as well as the genocide of aquatic shapeshifters and the freshwater mers of Florida, Ink’s marriage will bring lasting peace.

Or so it seems.

Mere hours before she’s supposed to leave the ocean for her customary year as a drywalker, Ink meets Hal, an alligator shifter who warns her that a storm is brewing. There is malicious intent behind Ink’s marriage—and worse, meeting Hal has also caused a storm to rage in Ink’s heart. Nevertheless, loyal to her tribe, Ink will put aside her feelings and journey to Miami to marry the decadent King Manx.

Ink soon learns that her only hope of surviving the crashing force swelling around her is to tap into a power deep inside—a forbidden power that might destroy them all. 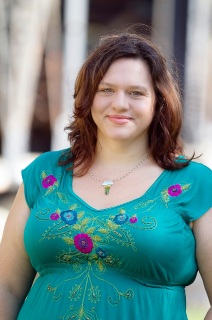 1.What is your favorite mermaid story or myth?
When I was a teen, I fell in love with the Slavic/Russian novels written by C. J. Cherryh, including her work Rusulka. Rusulka is the story about a drowned girl who becomes a haunted spirit. Rusulka are prevelant in Slavic myth. They are often depicted as spirits, but sometimes they appear as nymphs or water sprites. I was really inspired by Cherryh’s Rusulka character.

2.    What was the inspiration for your mermaid novella?

I moved to Florida about five years ago, and I was really inspired by all the sights on the coast. We’ve taken trips to Miami on a few occasions. I enjoy the architecture, but dislike the vibe of the city. It’s the same vibe Ink feels when she is there (sorry, Miami). I live on the Space Coast, not far from NASA, and I love this area. We are close to Cocoa Beach which has the feel of a “once-happening” place. There is a quaint charm to its faded, sea-side glory. I adore Cocoa Village, a quaint downtown area. There are lovely little shops and old oak trees with Spanish moss. It was the perfect setting for Ink’s eventual rendezvous with a good friend.

3. If your novella was made into a movie, who would play your main characters?
Ink is hard to cast, but I would probably choose someone like Megan Fox.
For Hal, I would definitely cast Jason Momoa. Because, well, Jason Momoa.

4.    What was most challenging thing writing about mermaids?

The world building! Oh my gosh, it took me forever to figure out just how “under the sea” functioned in terms of a society. There was nothing to go from so I just made it all up! It took a lot more time and brain-power than I expected.

I actually really love cecaelia, mer-octopus like Ursula. They play an important role in Ink.
6.    What else should we know about your novella?

There are alligator shifters and nyotaimori (Google it). I now know way more about alligator mating calls than a normal person would find useful. Don’t judge me by my Google searches. J

Never miss a  Falling in Deep release! Join our newsletter for behind the scenes information and release updates: Join the Mermaids!
WIN! WIN! WIN!

You can win $75 in Amazon cash!  Enter our giveaway now!