I don’t know how it happened, but Tuesday passed me by!  I’ve been in Wisconsin on vacation, visiting family while eating my way through the state and I lost track of the days.  So, though I am 24 hours late for the release (and I just one-clicked to get my copy), let me introduce An Officer and a Mermaid by Blaire Edens:

When a slave uprising threatens the life of Syreena, the daughter of an eighteenth century plantation owner, a servant uses voodoo to transform her into a mermaid. The spell will be only broken when she returns to the beach where it was cast. After three hundred years of swimming, she’s ready to trade fins for legs.  The only problem is she can’t find her way.

Dylan, a twenty-first century Coast Guard Officer, has sworn off love for the sea. When a wave throws him overboard, Syreena uses her amulet to ward off the sharks and save his life.
With Syreena and Dylan stranded on a remote cay, Dylan has the know-how to build a raft and navigate but his near-drowning has made him terrified of the water. Syrenna will use every charm she has to convince Dylan to take her home.
Even if it means falling in love. . .
It was a small amulet, about the size of a small Manonsillo fruit, painted with the image of Mami Wata, a mermaid-like deity venerated by the slaves. She was carefully painted, from the curls in her ebony hair to the scales of the snake wrapped around her neck.
Guilliame said, “Mami will show you the way.” He held up a leather pouch and threaded onto the thin leather strap that held the amulet. “Do not lose be without these until you are sure you don’t need them.”
“How will I know?”
“There will be no question. You will be safe.” The lyrical sounds of West Africa were heavy in his voice. “Do not be afraid, mademoiselle. Your papa and I are doing this because it is all we can do. When it is time,” Guilliame said, “you must return here, to this very spot. Do you understand?” His eyes were serious. “You must complete the circle.”
“I understand,” she replied in a whisper.
Guilliame stood behind her. He placed the necklace over her head. The leather pouch hung right above her breasts. She touched it with her finger. It felt warm, alive.
“Keep your fingers on it,” Guilliame said. He touched her shoulders, a familiarity unimagined only minutes ago.  “Good luck.”
His bass voice was hypnotic, drifting between the patois of the island and the stranger, foreign sounds of West Africa. Her eyelids became heavy; she was falling into a deep sleep.
The sounds of the beach became louder and Guilliame’s voice became more distant.
The last thing she heard was, “She will swim alone until the man who is her true equal comes to her.”
She whirled into a vortex of color, sound and wind. Her body felt lighter and lighter, weightless.
Then there was nothing but blue. 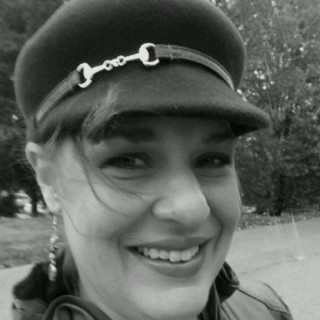 Author Interview:
1.    What is your favorite mermaid story or myth?
I love the Afro-Caribbean myth of Mami Wata. Until I started researching this book, I had no idea there were so many different myths from around the world that featured mermaids. I had a mental image that all mermaids were blond and fair. I loved the idea that there were mermaids of all sizes and colors and both male and female. Since I’m neither blonde, nor fair-skinnned, Mami Wata was a mermaid I could identify with more easily.
2.    What was the inspiration for your mermaid novella?
This novella really came to me in one big chunk. I’d been watching Deadliest Catch on Hulu and I thought if anyone comes into contact with mermaids, it would probably be the Coast Guard. What happens if a logical Coast Guard Officer has to accept that there really are mermaids? How does he square that with everything he’s learned in the military? I also liked the idea of an eighteenth century mermaid dealing with a modern man. It’s sort of Outlander meets Splash.
3.    Cast your characters. If your novella was made into a movie, who would play your main characters?
For Syrenna, I think I’d pick Melissa Benoist from Glee. I think she’d make a beautiful mermaid. I also liked her work on Homeland. For Dylan, I’d chose Gerard Butler. Mainly because he’s way hot.
4.    What was most challenging thing writing about mermaids?
Figuring out how Syrenna could operate outside the water. Also, physical affection. How does that work?
5.    Ursula or Ariel?
Ariel
6.    What else should we know about your novella?
An Officer and a Mermaid had all the elements I love in a mermaid stories:  beaches and sailors and age-old legends. It also, hopefully, explores the truth that just because two people are very different, they can make it work and find love along the way.
Connect with Blaire Edens:
www.blaireedens.com
https://blaireedensromance.wordpress.com/
https://twitter.com/BlaireEdens
www.facebook.com/blaireedensauthor
https://www.facebook.com/groups/422523621249428/