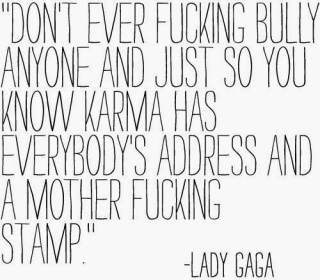 When I finished obligatory schooling, I thought I’d finished dealing with “mean girls” forever.  I breezed through university and most of adult life without coming face to face with those vile beasts.   I focused on feminism and the ever-present enemy of misogyny and inequality rather than railing against girls taking down other girls for no good reason.

And then I had children.  Two girls with gentle hearts and naive ideas. Not angels, no.  But NICE. Then I put these two in school with other kids.  And low and behold…those base creatures called mean girls were there — claws out, teeth bared, sniffing for prey.  Right now, they’re making a meal of my eldest.

Forget feminism.  Forget female empowerment.  Forget girl power. We’re back in the dark ages.  A part of me wants to see these kids burned at the stake for ruining my own daughter’s love of life.  Another part of me wants shake their eyes open so they can see they aren’t helping anyone.  Not even themselves.

But most of me doesn’t understand why being mean is just so… prevalent.

It’s a question that pops up in my writing — whether it be Untethered or The Mask Between Us (that will hopefully be published soon).  What makes us act evil?  Does it come from our own fears and weaknesses, or does it run deeper?

Why are there so many people out there who take pleasure in hurting others?  I’m talking from small emotional barbs to bigger issues of abuse all the way to taking a life.  My mother, a devout Catholic, would say it’s the devil.  My good friend, an atheist, would say it’s a degree of mental illness.  I don’t know what I believe, but either way, it scares me.

Yes, the mean girls are only a minute drop in the bucket.  Among the horrors in the world, calling someone “stupid” or “fat” or throwing things at her may be insubstantial by comparison. It’s a nearly invisible fissure in the dam that holds back evil.  But enough fissures weaken the dam and evil dribbles in through the cracks.

Unfortunately, I now have to arm my daughters against the mean girl attacks.  I have to train them for a warfare of words and hope their emotional defenses hold off any lasting damage.  Thing is, I’m not very skilled at that.

There are plenty who are kick-ass awesome.  My girls are two of them.