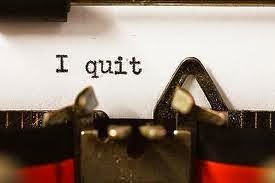 Recently, a conversation at dinner with relatives about this problem of mine bothered me so much that I — guess what? — got up and left the table.

Don’t get me wrong — if I have a responsibility, I follow through.  You can count on me to do what I say I will.  That’s a fact.

However, give me a task that no one is waiting with bated breath for me to finish and I…well…I usually won’t finish it.  When the going gets tough, I get going.   For example:

Getting my permit to drive a boat on Lake Leman: I took one boating class listing all the ways one was to hang a flag to communicate with other boaters and knew I wouldn’t continue.  It was too much like learning a new language.

Learning Swiss German (Bernese dialect): Listened to three tracks on the cd and figured I’d forget it.  This was learning a new language.  I’d had a hard enough time with French, but Swiss German was a tongue twister.

Driving stick shift: 10 lessons with a driving teacher that could make Satan seem lovable.  I actually broke into tears every time I reached an intersection.  Thank God for automatic.

Making macarons:  I got a fancy macaron kit and a ton of brightly colored food dye.  So far, I haven’t even gotten as far as whipping up egg whites.  I mean, yes, it looks good, but it also looks like work.

Playing any and all Super Mario games:  Hit with X. Jump with A. Spin with Y.  Boost your power with B.  Uh, no.  I prefer the letters of the alphabet to spell something. Ciao, Mario.

Learning Jass:  Have you ever played this Swiss card game?  No?  Then don’t judge.  Yes?  Then you should know why I quit.

Today while I was suffering in front of the computer, trying in vain to write, it occurred to me I could just quit. I could just forget writing completely.  I mean, it’s what I usually do when things get difficult.  I wrote two books this year that have yet to see a publishing contract. Writing the third has been nothing but slow and steady torture. It’s not like the world is waiting for me to pen something else.

Writing is hard and I ask myself every day why I do it.  And every day I decide to continue even though I don’t exactly know the answer. There are times when writing is fun and fulfilling.  But most often, I find writing an awful, difficult ordeal because I want to do it well.   I don’t know if I write because it heals a gaping wound in my gut or if it’s the act of writing that’s created an ulcer. Do I write because when I see the word count stacking up, I finally feel worthy or I finally know it’ll be finished?  Or do I do it because when I don’t write, I don’t like who I am?  But when I don’t like who I am, I often don’t want to write.

I’m not sure what the real reason is.  But maybe it doesn’t matter. Whatever the reason I write, it is vital to my being.

I’m a chronic quitter. I’ve given up on sewing, dancing, accounting, biking, running, tutoring and (luckily for all of you) singing.  But I never intend to give up on writing.

Just don’t ask me why.

4 thoughts on “Calling it Quits”